If you are a cricket fanatic, then we are in no mood to explain to you how important World Cup matches are and how every game in the World Cup has something to offer us.

However, when we look back at World Cup matches‘ history, a few have showered the audience with breathtaking situations. We remember the cricketers’ iconic moves and how they handled the most difficult situations. 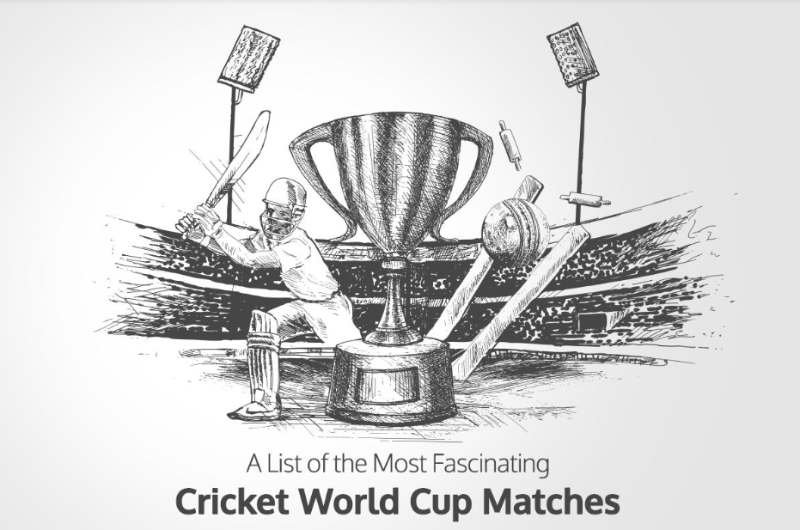 Millions of people watch World Cup matches, and the suspense, thrill, excitement, and celebration surrounding it are evident from the number of people who watch it. If you play fantasy cricket league, you should know all these.

The Cricket World Cup commenced in 1975, and the world has witnessed some amazing matches ever since.

We all remember New Zealand versus South Africa match held on 24th March 2015 at Eden Park, New Zealand. Umpires Ian Gould and Rod Tucker did a good job for the match.

South Africa led 281 for 5 with Faf du Plessis and AB de Villiers at the crease. We do remember the performance of hard-hitting batsman Brendon McCullum.

Also, Grant Elliot’s 84 not out gave the match some excitement. A crowd of over 40,000 people at Eden park appreciated Elliot’s performance on that particular day. The excitement surrounding the game made it one of the best cricket World Cup matches ever.

It is again one of the best World Cup matches that one wants to watch over and over again. Played on 25th March 1992, at Melbourne cricket ground, Australia, Brian Aldridge and Steve Bucknor were the umpires.

Pakistan won its first-ever World Cup title by defeating England by 22 runs under the captaincy of legendary Imran Khan. Also, from what we remember about the excitement related to this match.

It was Australia’s first time hosting a cricket World Cup final. Around 87182 spectators watched the final. Aqib Javed and Mushtaq Ahmed got 2 and 3 wickets, respectively, which made Pakistan win. Moreover, Wasim Akram was the man of the match.

This is a memorable match and goes down history. The venue was Chidambaram stadium in India, and the game was played on 9th October 1987. Under umpires David Archer and Dickie Bird, Australia scored well against India.

Dean Jones played spinners while he was batting. Maninder Singh took the shot towards long on in the 3rd match of the 1987 World Cup match. Australia won the game by 7 runs.

Played on 18th June 1983 at Tunbridge Wells, England; this game had Barrie Meyer and Mervyn Kitchen as their umpires.

One of the greatest all-rounders in the history of cricket, Kapil dev had the most excellent ODI innings on this day. He came out at 9 for 4. His counter-attacks are still talked about, which helped India will.

Even if we talk about individual performances, Kapil dev did well.
Kapil believed in his team and made India win by scoring 175.

He scored 79 from 222, hit 16 fours and 6 sixes, and scored 100 runs. The incredible performance by Kapil dev makes the match worth remembering.

Played at the Wankhede Stadium in Mumbai, India. India won this match against Sri Lanka. It was played on 2nd April 2011; Kumar Sangakkara won the toss for Sri Lanka and decided to bat first.

Mahela Jayawardene and Sangakkara jointly for 62 runs before being dismissed at 48 runs. Around 135 million people watched the match on television in India alone.

There were about 42,000 spectators at the venue. The victory of India on the home grounds makes cricket fans in this country emotional while talking about the game.

Played on 2nd March 2003, in South Africa, it is yet another one of the most interesting cricket matches in World Cup history. Andy Bichel delivered an amazing performance in this match. Bichel’s 7-20 helped England slip from 205 to 48-4 and 114-7 due to a not-so-impressive 205.

Bichel scored 34 priceless runs in the second half of the match consisting of 2 boundaries, to secure victory.

1996 World Cup was the 6th ICC Cricket World Cup final. On 17th March 1996, the match was held at the Gaddafi stadium, Pakistan, where defending champion Australia was playing against Sri Lanka.

Sri Lanka held onto its spin attack, which helped them overcome a nerve-wracking start. Ranatunga and Asanka Gurusinha assisted Aravinda de Silva in a match-winning knock-out.
We all remember his performance from this particular World Cup match.

With umpires Aleem Dar and Billy Bowden, this game was played on 2nd March 2011 in Bangalore-based M.Chinnaswamy stadium.

Ireland’s Kevin O’Brien scored the fastest century ever at this World Cup. The breathtaking century is what makes this match extra special. Ireland won the game despite England performing amazingly. The game was dramatic and provided a great dose of entertainment to the spectators.

Played at Lord’s, London, on 14th July 2019, this is another interesting World Cup final match where New Zealand was hosted by the English side. The Lords hosted the 5th World Cup final this time.

Both teams scored 241 runs at the end of the game, which led to a super over to break that tie. The Super over was also a tie!! England won the game on a boundary count-back rule by scoring 26 boundaries to New Zealand’s score of 17. It helped it win its first Cricket World Cup victory.

This was the first time the ODI final required a Super Over; thus, a boundary count had been used to detect the winner. This helped it get a very solid place in the history of cricket.

Held at Edgbaston, Birmingham, in 1999, Australia scored 272 for 5 while South Africa scored 271 for 7 in this match. David Shepherd and Srinivas Venkataraghavan were the umpires.

England’s Edgbaston cricket ground hosted an ODI in the second semi-final of the 1999 World Cup match.