ICC T20 World Cup 2021: New Zealand has trashed England by 5 wickets in the semi-finals and qualified for the world cup finals. Daryl Mitchell’s unbeaten 72 Runs in 47 balls has helped NZ clinch the victory in 19 overs.

After winning the Test Championship earlier this year, New Zealand eyeing to win their first-ever T20 world cup. Pakistan and Australia to play second semi-finals to face NZ on the judgment day. 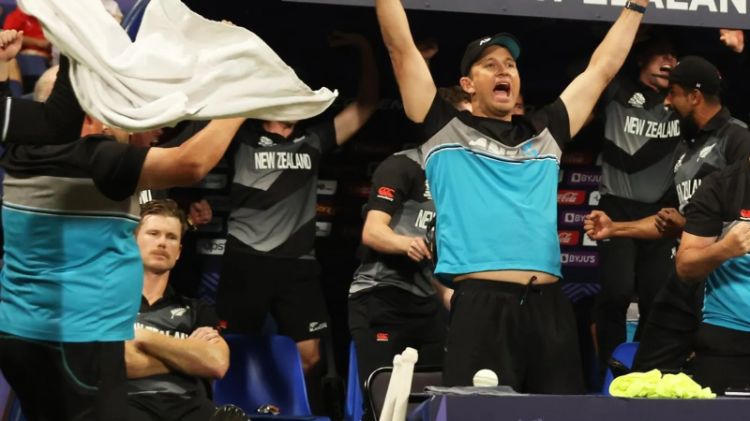 Kane Williamson won the toss and decided to bowl first. With Jason Roy injured and ruled out of the tournament, England opened with Johny Bairstow along with Jos Butler. England slowly started the innings in the powerplay and lost openers in quick time.

England – 166/4 in 20 Overs: Dawid Malan and Moen Ali built a partnership in middle overs while helping England to surpass 150 runs. By the end of the first innings, England has scored 166 Runs. Moen Ali has registered his first T20 WC fifty.

With the target of 167 runs, New Zealand lost two quick wickets of Martin Guptill and Kane Williamson in the powerplay to Chris Woakes. However, Daryl Mitchell and Devon Conway played sensibly and put the blackcaps in a commendable position.

James Neesham out from nowhere and scored a quickfire 27 Runs in just 11 balls with 3 massive sixes and a boundary. Daryl Mitchell led the team from the front and scored the winning runs for the team.

New Zealand qualified for the first time to ICC T20 World Cup finals. They were previously knocked out from semi’s back in 2007 and 2016. The remarkable run of NZ continuous in both longer and limited over formats of ICC events.

Can New Zealand win their maiden ICC T20 World Cup under the captaincy of Kane Williamson? Stay tuned to this space to know more latest cricket news and updates.