It was barely a few hours after India‘s 238-run victory over Sri Lanka when the two players arrived at the MI camp. For Bumrah and Rohit, the Pink Ball Test match at the M Chinnaswamy Stadium in Bengaluru was unforgettable. 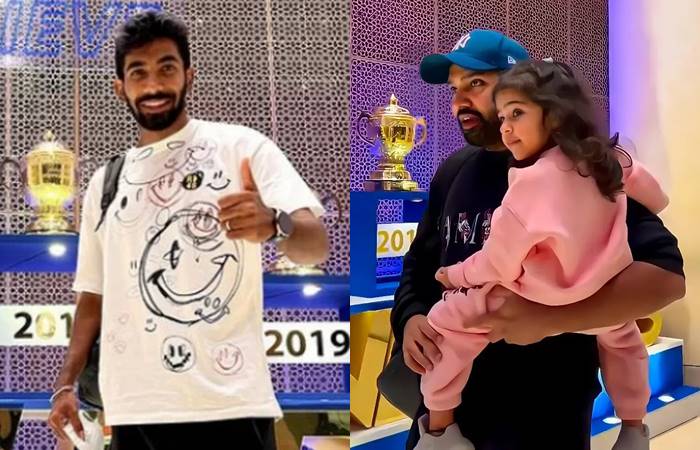 Related: IPL 2022: No IPL for Hardik Pandya till he clears fitness test at NCA

Meanwhile, Mumbai Indians posted a video on social media in which both the MI captain and the fast bowler are seen entering the team hotel.

While Bumrah reached the team hotel alone and Hitman arrived with his family i.e. his wife Ritika Sajdeh and daughter Samaira, during this time he was seen looking at the five trophies present in the hotel.

Rohit Sharma and Jasprit Bumrah were involved in the retentions just months before the IPL 2022 mega auction, along with Indian limited-overs batting sensation Suryakumar Yadav and Caribbean power-hitter Kieron Pollard. While Sharma was retained for Rs 16 crore, Bumrah got Rs 12 crore.

After buying some new players at the two-day mega event in Bengaluru last month, Mumbai Indians will now be hoping to get the most out of their new squad, while also eyeing a sixth IPL title.

After winning consecutive titles in 2019 and 2020, Rohit Sharma had a rough last IPL season as his team failed to qualify for the playoffs.