The young sensation from South Africa, Dewald Brevis has got an opportunity to play in the cash-rich T20 league. He made his debut for Mumbai Indians during the game against Kolkata Knight Riders. 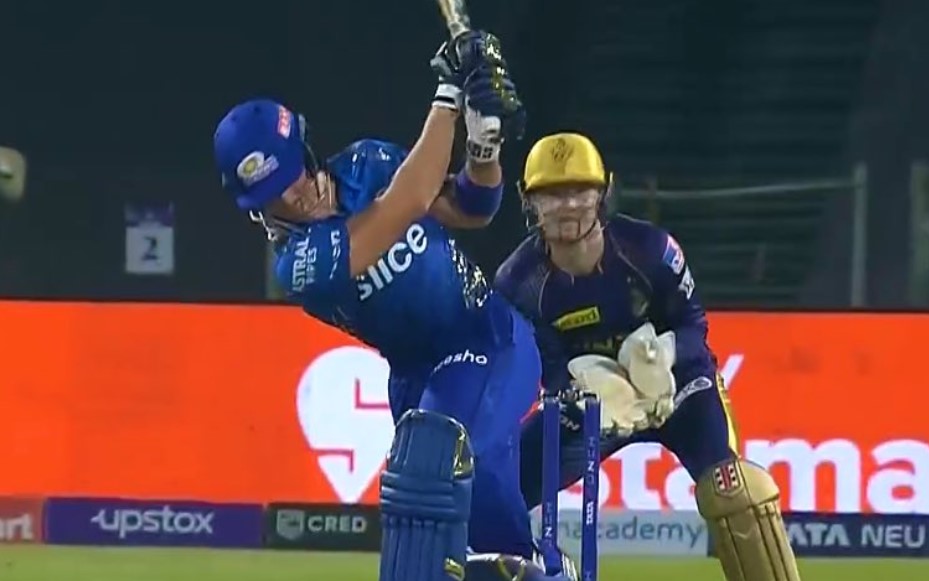 He announced his arrival to the IPL in style by playing a quick-fire knock. The right-handed batsman welcomed their main weapon, Varun Chakravarthy with a no-look six that stunned everyone.

Coming to the game, the skipper of KKR, Shreyas Iyer elected to bowl first after winning the toss. Both the openers of Mumbai had no answers to Kolkata pacers as they were struggling to score.

As soon as Rohit lost his wicket to Umesh Yadav, the U19 cricketer, Dewald Brevis was given a chance to bat at number one. He started attacking the bowlers from the very first ball.

When Varun came to the attack, Brevis welcomed him with a no-look six and also launched an attack on the other bowlers. However, while he was trying to hit a big shot off Varun, he lost his balance and was stumped by Sam Billings.

After losing the top-order, Suryakumar Yadav and Tilak Varma built a good partnership before playing big shots. On the other hand, the West Indies cricketer, Kieron Pollard smashed three sixes to help them to put a total of 161 on their board.

While chasing a moderate total, the bowlers of Mumbai Indians troubled the KKR batsmen with a tactic of bowling short-ones. However, Venkatesh Iyer was settled and looking to finish the game for his team.

Andre Russell started his inning with a six and a four before giving his wicket to Tymal Mills. When Mumbai thought they came back to the game again, Pat Cummins came out of the syllabus to take his team home.

The Australian skipper smashed 12 balls fifty including 4 boundaries and 6 huge sixes and became the joint-fastest fifty scorers along with KL Rahul.