The Indian team registered its 12th consecutive win in the T20 Internationals by clinching the final game of the three-match T20I series against Sri Lanka in Dharmashala. Rohit Sharma and his co. were amazing throughout the series. 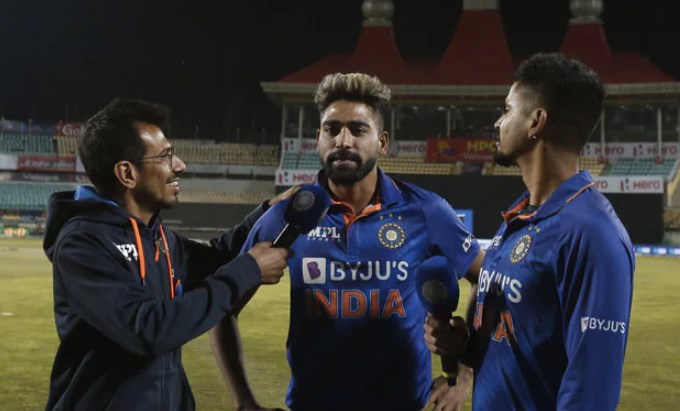 Shreyas Iyer, who has been in tremendous form with the bat, has scored yet another fifty in the shortest format of the game. He went on to score 73 off just 45 deliveries which include 9 fours and a six.

Iyer was also adjudged as the Player of the Match and the Player of the Series for his consistent runs throughout the series. After every good win, the leg-spinner Yuzvendra Chahal has a habit of interviewing the player who provides the best performance.

So, Chahal went on to interview both Shreyas Iyer and Mohammed Siraj who were done their job in the final T20I game. When replying to Chahal’s question, Iyer said that he wanted to stay on the crease to win it for his team.

On the other, the leggie took a dig at the Indian pacer for the latter’s new hairstyle. Looking at Siraj’s hair, Chahal funnily said that the grass has dried up after not receiving any water.

This one made everyone laughter including Shreyas Iyer, Yuzvendra Chahal and Mohammed Siraj. BCCI has shared the same video on their social media platforms as well. When Chahal asked Siraj whether he would go to the saloon before every match, the pacer said there is nothing like this.

From mantra of success to a guest apperance! 😎😎

Coming to the match, Sri Lanka’s top-order was demolished by Indian pacers and then Danushka took the responsibility to help his team to post a decent total of 146 on their board.

Though India lost both their openers cheaply while chasing an easy target, it was Iyer again who went on to score yet another fifty and helped his team to whitewash the Sri Lankan team.