Ulagayanayan Kamal Haasan recently visited his dearest friend and Superstar of Kollywood Rajinikanth. Ahead of his upcoming film Vikram release, Kamal has met Rajinikanth along with film director Lokesh Kanagaraj. 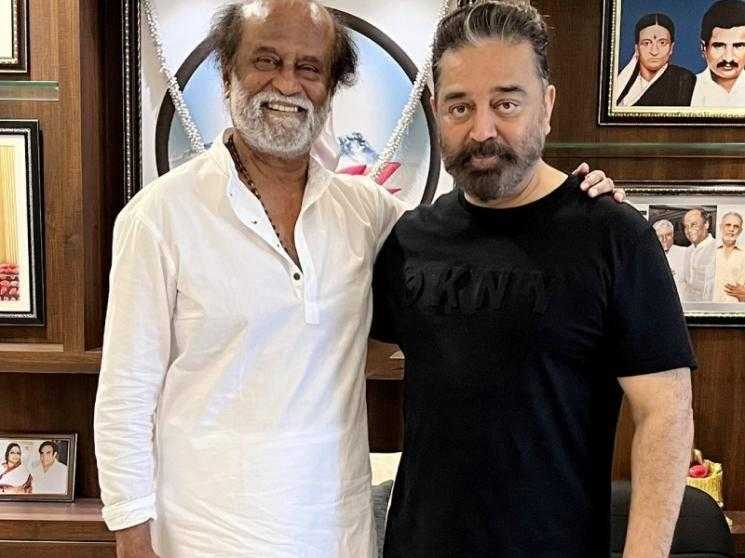 The film crew of Vikram seems too busy promoting in various media and locations in the past 2 weeks. Adding more impression to its release, Kamal Haasan decided to meet his long-time friend Superstar Rajinikanth at his house in Chennai.

Earlier its is reported, that Rajinikanth was invited for the audio and trailer launch event of the Vikram movie which was held in Chennai in May 2022. Due to some personal reasons, Rajinikanth can’t able to attend the event.

However, Kamal Haasan along with his director Lokesh Kanagaraj has made a sudden visit to Rajinikanth’s house, and both of the stars posed for a picture posted on social media by Lokesh.

The image of both biggest stars of all time in Kollywood has gone viral on social media. As per the reports, Both the stars meet after a long time and discussed their personal life and upcoming movies.

Touted to be an action Entertainer, Vikram starting Kamal Haasan, Vijay Sethupathi, and Fahadh Faasil is all set to release on 3 June 2022 worldwide. The film was written and directed by Lokesh Kanagaraj.

The songs of Vikram has released in May 2022 and were composed by Anirudh Ravichander. The chartbuster album adds immersively weighable to film promotion. The trailer of Vikram also received huge attention from the audience.

Kamal Haasan and his team actively promoted the film across India in which he went to various parts including Mumbai, Kerala, Hyderabad, Malaysia, and Dubai. With huge expectation and promising trailer, Vikram is expected to collect big at the box office.