Actor Sivakathikeyan has been invited as a special guest for RRR movie Tamil pre-release event. The cast and crew of the RRR movie including SS Rajamouli, Ramcharan, Jr NTR are present at the event which was held in Chennai. 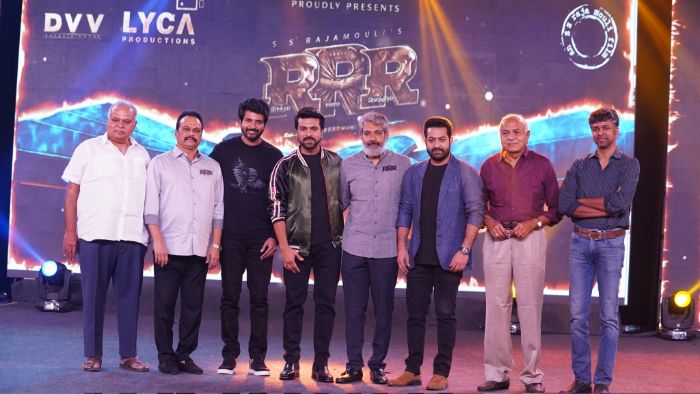 During his speech Sivakarhikeyan says, he was excited to call for the event as a guest. He also recalled how SS Rajamouli’s movies like Mahadeera and Naan-E inspired him as an actor. He also wished the cast and crew of the movie including Ram Charan and Jr. NTR for the success.

Addressing the audience, Jr. NTR thanked the guest Sivakarthikeyan for his presence at the event. He also expressed that RRR will set a trend for featuring two big actors in the same film. Ram Charan also thanks all the guests and audience for attending the event. Also, he ensured will continue his brotherhood with Jr. NTR as long as he lives.

Related: Is Yuvan Shankar Raja to compose music for Vijay’s next movie?

Director SS Rajamouli shared his experience working in the film and thanked Chief Guest Sivakarthikeyan for his support for RRR. During his speech, Rajamouli confessed that the USA premier show tickets are sold up to 2 million in 10 days just because of Ram Charan and Jr. NTR acting together.

On the 27th of December, the pre-release event of RRR has hosted by Bajvana Balakrishnan along with RJ Vijay (Mirchi). The event was held at an indoor stadium along with 500+ audiences.

The magnum opus Raththam Ranam Rowthiram (RRR) is the much-awaited film of India which is set to release on January 7th worldwide in five languages including Telugu, Tamil, Hindi, Malayalam, and Kannada.