The title of Sivakarthikeyan‘s next with director Anudeep KV has been named Prince. The first look poster of Prince’s movie has been released along with the title.

Sivakarthikeyan is all set to make his Telugu debut for the first time after featuring in more than 20 films in Tamil. Touted to be a bilingual family drama, Prince shooting is going in full swing. 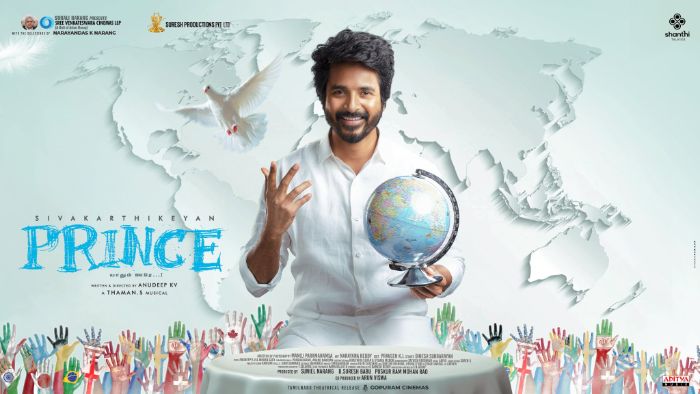 In the first look poster of Prince, Actor Sivakarthikeyan features with his charming smile holding a globe in his hand. Based on the poster and background, The actor is touted to return from overseas and involve in family problems.

Prince is written and Directed by Anudeep KV, the budding director who is prominently known for his previous movies including Jathi Ratnalu and Pitta Goda. The director took huge responsibility for launching the next big star of Kollywood to Telugu cinema.

After his fun-filled role as a college student in his previous movie Don, Sivakarthikeyan is likely to play a different character in Prince which is expected to reveal during the teaser.

Ukraine model and actress Maria Ryaboshapka roped in as the heroine of Prince movie. She will be doing her debut film in India alongside Sivakarthikeyan.

S Thaman set to compose soundtrack and background score for Prince movie. The film is bankrolled by Sree Venkateshwara Cinemas LLP and Suresh Productions. The further announcement about the cast and crew will be revealed soon by the production house.

Stay tuned to this space to know more latest updates about Prince movie by Sivakarthikeyan on Newsintv.com.